Bargain-Loving Brits in the Sun – Is it the real Spain, or is it just fantasy?? 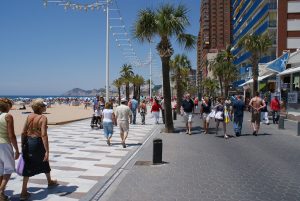 As someone who writes about life in Spain, I’ve made several media appearances, both on television and on radio. After my last appearance on BBC1’s The One Show, I vowed I would never agree to be interviewed again. I spent two hours with the film crew, and while I obviously didn’t expect to spend a lot of time on screen – after all, this wasn’t The Sandra in Spain Show – I did expect more than the 30 seconds or so that finished up in the programme. This was at the time when it was reported that almost 25% of the Brits living in the Alicante province had returned to the UK. I was chosen to appear because I always give a positive view of life as an expat in Spain, ‘for balance,’ they said. They lied, because the resulting programme was very anti-Spain.

So, when I saw that a new programme was airing this week – Bargain-Loving Brits in the Sun – I was prepared for more spin doctoring to show Spain and the expats who make their lives there in a far from complimentary light. Thankfully, I was pleasantly surprised, although the programme did nothing to enhance the reputation of Benidorm – mainly because it was concerned with the areas where the Brits congregate, such as caravan parks and the Brit bars. Hopefully we’ll see more of this lovely town in future episodes. And Benidorm is a lovely town.

My first visit to Benidorm was back in 1968, soon after the mayor had famously returned from his motorbike ride to Madrid to gain permission from Franco for holiday makers to wear bikinis on the beach without running the risk of being arrested. I loved it then, and vowed I’d return one day. It took exactly 40 years to keep that promise – and by the time we moved to Spain in 2008, with Benidorm just over an hour away, I’d gone off the idea, having read and seen what goes on there.

I was imagining drunks falling over in the street and fish and chips and full English everywhere, with not a tapa or paella in sight. Strangely enough, what convinced me I needed to return was the comedy series Benidorm. Like all good comedies, it takes a grain of truth and exaggerates it for comic effect. Surely the streets couldn’t be gridlocked with Madge Mobiles – or mobility scooters as they were known in the DBB (Days before Benidorm)? As it happens, I’ve never seen so many in one place, or so many people who obviously didn’t need them riding them around town.

My first visit convinced me that Benidorm is a place I still love, and we’ve been back a number of times since. The Old Town and the beach are stunning, and the prices at the bars and restaurants are brilliant if you find the little places tucked away in the back streets rather than go for the seafront tourists traps. I get annoyed when people run Benidorm down, because most of the people who do so have never even been there – like me, they formed their opinions based on what they’d seen on tv and read in the press and online.

What I really liked about Bargain-Loving Brits in the Sun was that the researchers had actually picked normal people who wanted to make a life for themselves in the sun and pay their way, rather than staying in Britain and picking up benefits. There was Eddie, a singer from Liverpool who had arrived with just enough money to keep himself for a month, and Avon lady Val  from Coventry, who is servicing two mortgages thanks to being the third highest earning rep in Spain. Dean came over from Essex with £400 in his pocket, and is now making a success of running Camping Benidorm. His Sunday roasts, at €5.95 including a drink, are sold out every week..

But the star of the show was definitely Wayne, who came to Spain 23 years ago and worked as an entertainer for the equivalent of £8 a session. Now he owns and runs Levi’s Showboat Cabaret Bar, with a turnover of around €60,000 a week. However, the 16 hour working days are getting too much, so he’s sold it to Mick and Karen. He’ll be helping with the transition, and still performing his famous drag act at the venue.

There’s not much sign of integration in the first episode, but they all seem to be keen to make Benidorm their permanent home. Val has been here for 13 years, while new arrival Eddie has bought a caravan for €500, but will have to pay €225 a month rent. That spurred him on to tramp the streets of Benidorm looking for gigs. Yes, maybe it was irresponsible turning up with just enough money for a month, but at least the lad has something about him, and his persistence was paying off by the end of the first episode.

Dean was doing pretty well at Benidorm Camping too. There are 10 camp sites in the area, so there’s a fair bit of competition, but Dean is prepared to put the work in to build up the business. All the expats worked hard, and didn’t whinge about their lives, or complain about Spain or the Spanish. All in all, it was a good start, with a positive image of Spain and the featured expats. I’m looking forward to future episodes, and I really hope they continue as they started.

8 Responses to Bargain-Loving Brits in the Sun – Is it the real Spain, or is it just fantasy??