A mixed week for Paddy! 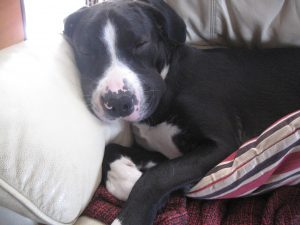 Paddy looking and feeling sorry for himself. Bees and wasps are now off the menu!

Paddy has been such a good boy while I’ve been battling this virus, and he’s been so good at dog training that I decided to take him for a really long walk on Sunday as a treat. It was a treat for me too, because I’ve missed our meanderings through the orange groves – and missed the glorious sight of him in hot pursuit of rabbits which – thankfully – always manage to outwit him. I really don’t know how I’d cope if he brought me a comatose bunny, and it would be comatose or worse, because although he would only want to play, the combination of a small bunny and 32 kilos of boisterous puppy is only ever going to have one outcome, and it’s going to be bad news for the bunny.

We got home after an hour, and Paddy settled down for a well-earned nap, after checking out the garden with Daddy. After a while, I noticed he was messing with his nose. Now, he usually grooms his face and snout with the help of a paw, but this looked like something else. When I went to see what was happening I was horrified. My beautiful boy looked like he’d got a new job as a punchbag in a gym. His snout was three times its normal size, and literally growing in front of my very eyes.

My first thought was that he’d picked up a pine caterpillar, but there are no pine trees in the orange groves. Then I remembered that the hairs can travel on the wind, and I was beside myself. I looked out the vet’s number, but the only number I had didn’t switch to an out of hours service. I wasn’t too worried, as I was sure there’d be a list of out of hours vets on the Internet. Only there wasn’t, and after 15 frantic minutes when Paddy was getting more and more distressed, I had the idea of ringing one of the animal shelters – after all, they must need an out of hours service, right? Thankfully, I was right, and a few minutes later, we were on our way to the vet at Benimar.

As I drove like Lewis Hamilton on a grand prix circuit, I could see Paddy reflected in the rear view mirror, and it wasn’t a pretty sight. His eyes were now closing rapidly, and I was terrified in case the swelling travelled the other way and blocked his airways before I could get him the help he clearly needed. I was no longer worried about pine caterpillars, as the vet had ruled that out because his tongue wasn’t swollen, but obviously something was very wrong.

When we arrived at the vet, she administered a cortisone injection straight into the vein. For this, he had to keep very still, and of course, he didn’t want to. It took 20 minutes of puppy wrestling to get the cortisone where it needed to be, and both the vet and I were in a state of collapse by the time the deed was done. She was pretty sure he’e eaten a bee or a wasp, and had an allergic reaction, and because he hadn’t reacted until about an hour after we got back, it was unlikely it had happened in the orange grove.

With treatment, the swelling soon started to subside, but his hormones must have still been racing around in the evening, because our usual 20 minute walk took less than 15, and we also managed to chase two cats. Normally, he hardly gives them a second glance.

Tuesdays’ training class was looking distinctly dodgy, but he’d made a full recovery, so off we went. He’s made such big improvements over 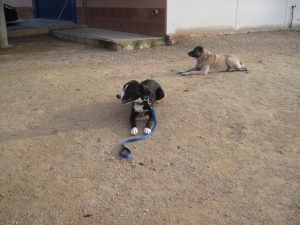 Finally – Paddy gets the concept of ‘stay,’ It only took 5 months!

the last month that the trainer Alex regularly checks in case I’ve traded him in for another model, but on Tuesday he really surpassed himself. We’ve finally managed to get through to him that ‘stay’ means just that, not ‘get up and follow Mummy just in case she’s leaving me here.’ And on Tuesday, he managed to ‘stay’ for a full five minutes, even with the temptation of other dogs who were not so obedient taking off after their owners. And he did it without a single verbal command – it was all done on hand signals. Oh, it was such a wonderful feeling not to be the Embarrassed One for once!

The only blip was when Paddy had his play time off the lead and he wouldn’t come back to have his lead back on. Alex said it was my fault, because I wasn’t giving him the right signals. My voice said ‘Come’ but my body language and hand signals said ‘Playtime!’  When I got it right, he came back right away, and I mentioned to Alex that maybe it was me who needed the training, not Paddy.

‘At last,’ he said. Now you know why you’re here every week.  It will be fine from now on.’ So, all this time, I’ve been the problem, not Paddy. It’s a sobering thought, isn’t it?