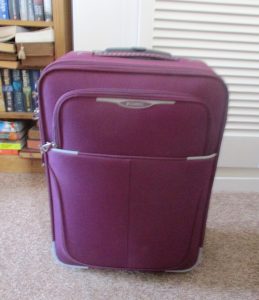 Is this the real case, or is it just fantasy? The case I brought back with me

On this website, there’s a category called ‘Only in Spain.’ It’s a tongue-in cheek, affectionate look at the extensive bureaucracy and the attitudes in Spain that are so different to the UK. Well, life seems to be imitating art, because it seems bureaucracy is becoming a problem in England too. Or at least in Plymouth, at least for me.

Regular readers will know that I need to be in the UK for longer than I expected, for reasons I won’t bore you with. So in early July, I flew back to Spain to sort a few things out and check on Piddock Place. I didn’t have a suitcase with me, so Glenys loaned me one of hers – a rather nice purple and grey number she’d bought at Al Campo in Zenia Boulevard a while ago. The case stayed with me all the way over to Spain, apart from when it went in the hold of the Falcon shuttle from Plymouth to Bristol Airport. It then stayed with me all the way back to Bristol, until I handed it into the safe keeping of the Falcon bus driver at midnight.

Arriving at Plymouth at 2.45 am, I spotted a purple and grey suitcase on the pavement. Looking in the hold, there were no other suitcases of that description, so off I trundled with it. After all, there can’t be that many purple and grey suitcases travelling from Alicante to Plymouth, can there? Apparently there can, because when I opened the case next morning to give Paddy his present for being a good boy for Aunty Glenys while I was away, what did I find? To my – and Paddy’s – disgust, there was no sign of his doggy chews, or my satnav, clothes, new nighties and bras, hair stylers, and all the other stuff that I’d carefully packed the night before.

What was revealed to our incredulous eyes was a television set, a freeview box, 4 packs of Spanish chocolate croissants, and a pack of 100 evil-smelling Spanish cigarettes. Miss Marple I ain’t, but as there had been Spanish students on the Falcon shuttle, and the missing case had been bought in Spain, I assumed somebody would be rather disappointed when they found my size 16 clothes which were built for comfort rather than fashion, and industrial quantities of doggy treats, as well as crystals, floral nighties and substantial underwear. Although there were no contact details in the case I had, there certainly were in the one I’d borrowed from Glenys, so I assumed it would be a matter of hours before I was reunited with my stuff, and Paddy saw how much I’d missed him when he found out how many treats I’d brought back.

How wrong can you be? The day passed, and my phone remained silent. The next morning, I called the Stagecoach Depot and explained my predicament. As nobody had been bothering them trying to track down their case, they said they couldn’t help, but would keep my details in case the other person returned my case and wanted theirs back. So I called the Police, to ask if I could report my case stolen, but apparently, it wasn’t stolen, it was lost, and I had to take it up with the carrying company.

I did this with gusto, going to Stagecoach Head Office, and asking what they were going to do about it. They did say they’d try and track down the passengers on the bus, but due to data protection laws, they couldn’t just email everyone who’d prebooked.

Not being one to sit and wait for stuff to happen, I put on my Miss Marple hat and started thinking logically. Yes, I can do that when I chose to, despite what people may say. I plastered photos of the case and its contents all over Facebook, and asked people to share. I also contacted all the university summer schools in the area, and asked if they could circulate their students and find out if anyone had the wrong case. Again I got the ‘data protection’ stuff, but as I explained, maybe the student concerned didn’t know what to do about getting their stuff back.

I also contacted Radio Devon, and had a nice chat to the lovely Pippa Quelch, who promised to air my problem on her show. So I felt I’d done everything I could to track down my case, and return the other one to its rightful owner.

Fast forward two months, and despite everything I’ve done, and Stagecoach has supposedly done, there’s no sign of my case, and I still have the other one gathering dust. I’m making another short visit to Spain this week, when I’ll need to put in an insurance claim for my lost case and its contents, so I headed to the nearest Police Station to get a Crime Number. After all, two months down the line, the case must be stolen, not lost, right?

Wrong, apparently. It’s only stolen if I have bank cards and/or statements, a phone, tablet, laptop or anything personal that could be used for criminal gain from my personal information in the case. Thankfully, although I always put my laptop in my suitcase – I had done exactly that on the trip out to Spain – for some reason, on the return journey, I put the laptop in my tote bag, which stayed with me on the bus rather than going into the hold. I have almost 5 years of photographs, articles and notes for books I intent to write on the laptop, so that would have been a really traumatic loss. Yes, I know – I should back it all up on a hard drive, and I have done, before anybody chips in. Now, where was I?

To me, if someone has your stuff, and has the means of returning it to you but chooses not to, they’ve actually stolen it. But to the Powers That Be, because the person who has my case didn’t actually rip it from my hands, it’s lost, not 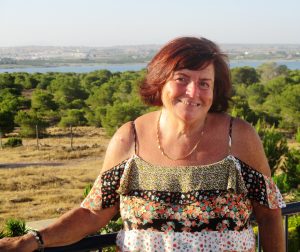 Me in Spain, wearing one of my favourite dresses, which was in the lost/stolen case. This may be the last photo of me in it

stolen. So I asked the Police if I could keep the case I have, and its contents. Apparently I can’t, because it’s not mine. Even though the other person has my stuff, which is worth considerably more than his – or hers. All I can do is register my loss on a website, and they’ll give me a reference number for the insurance claim.

I asked the Policewoman I spoke to what I should do with the case I had. All credit to her, she didn’t give the answer I would have done, which would have involved doing something physically and logistically impossible with said case. She suggested I take it to the bus company and leave it in their lost property department, making sure I got a receipt for it.

That’s exactly what I did, so now I don’t have the case that isn’t mine, or the case that is mine. And I still think my case is stolen, not lost, but bureaucracy rules OK, even in England’s green and pleasant land. One thing’s for sure, when I board the Falcon shuttle later this week, my – new – suitcase will be welded to my side, and heaven help anyone who tries to part me from it!