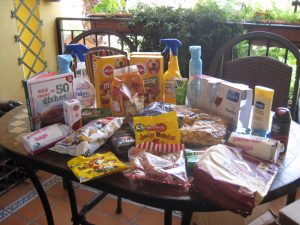 My Poundshop.com bargains – something there for all occasions!

One of the few things I miss about England is hitting Poundland – you know, where everything is just £1 and you don’t need to ask the price. When we go to the UK in the summer, I bring so much stuff back from Poundland, I’ve thought about asking them to paint the motor home in their livery. If only we had a Poundland in Spain! Well, now we have – or at least we have Poundshop.com, which ships to Spain. Okay, I know the Dealz shops are our nearest equivalent, but my nearest one is Alicante, and that means leaving Paddy for too long, so that’s out.

I stumbled on the site on Facebook, and when I checked it out, I found that they do Paddy’s favourite treats – Pedigree Biscrok Gravy Bones – for just £1. I can get them here, but I have to pay anything between €2 and €3, so he only gets them when we go to England or when I’m feeling particularly generous, and maybe a bit guilty if it’s been a busy week and he’s been left to Tony’s tender ministrations more often than either of us is happy with.

Investigating further, there are lots more reasons to buy – Bassets Jelly Babies, Pontefract Cakes, Trebor Strong Mints, Astonish cleaning products, Umbro deodorant for Tony, who will never use one squirt under each ‘pit when he can half empty the canister. The list goes on. All in all, I spent £28, and as I signed up for their newsletter first, I received 5% off the order. Shipping is £10 for a parcel up to 30 kilos – at 500g per packet, that’s a hell of a lot of gravy bones, so it’s excellent value.

On the website, they suggest that you make a combined order with friends and have it shipped to one address to share the postage costs, and that’s what I’ll do next time. However, as I’d never dealt with the company before, I wanted to see what the service was like before I involved anyone else. If you think £10 is a lot for postage, remember the parcel has to come across the Channel then overland through France and into Spain. And you receive a tracking link which helps you to follow the parcel’s progress. The company said I would receive my parcel in 7 days, and it came in 6, with email updates the day before and on the day of delivery, which gave me a window of approximately one hour during which the parcel would arrive. That’s very handy, since it saves you having to hang around all day. I had my parcel delivered to our local mail room for that very reason, but next time I’d be happy to have it delivered to my door, as it arrived within the stated time frame.

Looking at my purchases, as well as saving around half price on 4 boxes of treats for Paddy, I saved over £2 on Boots price for Vaseline Essential Healing Body lotion. On the whole shop, I’ve easily recouped at least double the postage costs, and I could probably order at least £60 worth of goods and still stay within the 30 kilo limit. You also have to consider what these products would cost here. While I tend to shop mainly Spanish, there are some things you just can’t get here, or that there is no Spanish equivalent to, like Tony’s favourite Pontefract Cakes and Jelly Babies.

Everything was well packed, with bubble wrap and that cushiony plastic stuff to stop it all rattling around the box. What I really loved was that the Astonish spray bottles were enclosed in heat sealed polythene, so in the unlikely event they got broken, it wouldn’t ruin the whole 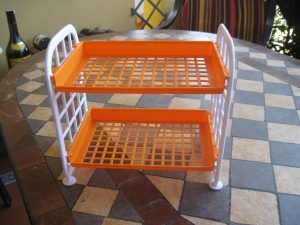 Oops! Forgot to include this handy mini storage shelf in the main picture. Perfect for the motor home.

If I have one small criticism, it’s that some of the categories only have a few items in them, so there isn’t the choice you would have in an actual store. However, I would imagine that would be addressed as the company expands its overseas business, and I certainly managed to get everything I wanted.

If you miss your British bargains – after all, there aren’t that many of them – head over to Poundshop.com and start shopping. This time next week, you’ll be unpacking your very own bargain box!

6 Responses to Poundshop.com comes to Spain!