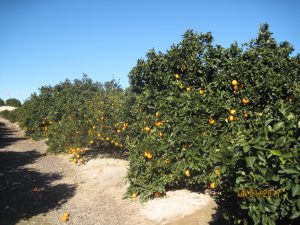 Have you noticed every 20 years or so there’s a major scandal? In the 1970s it was Watergate and Richard Nixon, in the 1990s it was Squidgygate and the Princess of Wales, and now, barely into 2017 I give you – Orangegate and Sandra in Spain. Okay, the implications are not so wide ranging, and the players are not so well known, but it’s a scandal, and everyone in the writing world has been affected by it at some time or other.

Since the arrival of the Internet, it’s much easier to get published, but it’s also much easier for unscrupulous websites to trawl around blogs and magazines and publish stuff without paying the original authors. Around two years ago, I agreed to write a regular Around Algorfa column for All Abroad magazine, without payment, as a favour to a friend and to help publicise events in my home village. Now a new company  based in Gran Alacant  -owns the magazine, and they have chosen to publish my article, without my permission, without my name on it, and without a back link to my website.

However, the implications are much wider than mere plagiarism here. The article mentions my dog Paddy by name, and walking in the orange groves. Now not only has Paddy got to cope with Mummy’s name change – according to the All Abroad website, the author is now Webmaster, not Sandra in Spain – he’s also a displaced person, moved to Gran Alacant, where as far as I know, there are no orange groves. Not only is Paddy robbed of his bunny chasing activities and the wide choice of trees to decorate, it’s a long walk from Gran Alacant back to Algorfa, so at a stroke his young life has been turned upside down.

On a more serious note, it takes a while to craft an article worthy of publication – which this obviously is, since it’s featured on the All Abroad front page. Then there’s the matter of images and copyright, which rests with the author unless otherwise agreed. The new website is pretty flashy, but I get the idea that all the chairs aren’t safely under the table at All Abroad HQ, since a lot of people – including myself – have commented that the author should be credited for the article, yet the silence from them is deafening, and there has been no response to me emails to the head honcho.

To paraphrase Ali G, I have to wonder ‘Is it because I’s a woman?’ because a fellow – male – writer only had to rattle his sabre a little bit. Immediately his article – also used without permission and back link, although at least his name was on it – was removed and an apology of sorts was made. Personally I think they’re not sorry that they ripped off quality content without paying for it – they’re just sorry they were caught doing it.

Ah well, that’s got that out of my system. I shall be keeping an eye on the website to make sure no other material of mine appears. I’m a respected, professional writer, and I’m not used to dealing with the kind of amateurs who would do such a thing and imagine they can get away with it. If Orangegate acts as some sort of lesson to the people involved at All Abroad, at least some good has come out of it, but I’m not holding my breath.

Update: My article was taken down 48 hours after I originally contacted the website. However, there has been no attempt at apology, privately or publicly. Like I said – amateurs, and dishonest amateurs who refuse to take responsibility for their actions at that.