It just popped into my head, honestly! 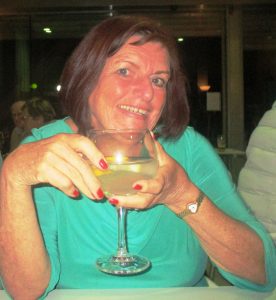 My new look – as advised by Spirit!

In the early days of my psychic development, something that I at first found disconcerting, but now find absolutely magical, is the way messages from Spirit, whether for myself or others, just pop into my head from nowhere. It happens mostly when I’m not even trying to make a connection or ask a question, and according to Alison and other experienced mediums, that’s a sure sign the message is comming from outside, and not from your own internal thought processes.

It’s only when you recognise how Spirit works that you realise that you’ve probably been receiving messages all your life, and just thought they were ‘lightbulb moments.’ In a way they were – it’s just that the light came from another dimension! Actually, the idea for this article just ‘popped into my head’ last night, and I started writing, then got stuck, because I don’t want this category to be just about my experiences and what I’ve learned, I want to be able to help others recognise how Spirit and the Angels are working with them, and use that information to develop their own abilities. So I did the sensible thing and left it alone, and as soon as I went back to the post this morning, I just knew how to explain it.

If you think this sounds far-fetched, or that it’s some hogwash I’ve come up with to make the post sound more exciting, well, that’s your privilege, but any psychic or medium worth their space will tell you that guidance comes in all forms and at all times. My teacher Alison Wynne-Ryder, who is also a well-known writer on all things spiritual, often says she’s been guided to write something, or to change the content of a lesson, and it becomes clear very soon why this needed to happen. As well as writing course content, articles and books, Alison writes her own guided meditations and poems, and  more often than not, the basic idea changes.

It’s easy to fight that and stick with your original idea, especially if you’re good at what you do, as indeed we both are. We are good writers, and we know our trade, but if you trust the messages you’re given, the end result can be so much more rewarding for you and for those who will benefit from the changes. This article is a vivid verification of that. My original idea was to tell you about several of my ‘popped into my head’ moments, and although they make for interesting reading, that’s about all you’ll get from them. However, I’ve now been guided to give more explanation of how it all works, so you can recognise and profit from your own similar moments.

The trouble is, some people have entirely the wrong idea about how messages come through from Spirit. You don’t need to be sat in a circle in a darkened room holding hands, or go into a trance, or call on your guides and the Angels to get the information you need. If you are open and receptive, you will receive what you need, when you need it, whether that’s inspiration for a creative project, an answer to a difficult question, or a solution to a worrying situation. Just trust in the Universe, and believe in yourself.

Now, briefly, I’ll tell you about two of my recent ‘lightbulb moments,’ and how they have affected me. The first came when I was chatting online to a Facebook friend who was having difficulty accepting the breakdown of his relationship, and was in despair and lonely. I don’t know this guy well – I’ve only ‘spoken’ to him online – but I found myself telling him that he would soon go out with someone he already knew, and that there would be questions involved. He pressed me for details, but that was all I had, and he said it was most unlikely, as none of the people he knew had ever figured on his romantic radar.

A week later, he contacted me with the news that he was going out with his neighbour, whom he’d known for 3 years, but never thought of romantically. They’d met in the corridor as he was on his way to his regular quiz night. She’d just broken up with her boyfriend, and said she needed to take her mind off things, so asked if she could go with him to the quiz night! I was a bit concerned that maybe he had made things happen, but the approach came from her. As he was telling me this, I got the message that this would not be a long term relationship, but that they would part on good terms and remain friends, and that is exactly what has happened. They realised they didn’t have a future together, but it gave them both the confidence to get out and meet other people.

How did this benefit me? Well, I was having a bit of a crisis of confidence, because although I was doing quite well with psychometry, mediitation, visualisation and other things, and had sensed loved ones around me, I didn’t believe I’d ever be able to do readings for other people. This proved that I could, and in fact two days after this confirmation, Alison asked us each to do a mini reading for a friend of hers we knew nothing about. I managed to identify 6 things – two past, two present and two future – which the lady was able to take. The ability is there, I just had to trust in it, and myself.

The second incident seemed trivial, but turned out not to be. My friend Glenys and I had booked an appointment with my hairdresser, and we were talking about it to some other friends, who encouraged us to make a pamper session out of it and have manicures and pedicures. Then someone asked me what I was doing with my hair, and I replied, ‘Just the usual trim to get rid of the split ends.’ Suddenly, there was a loud voice in my head saying, ‘Cut it short, Sandra.’ It was so clear, I assumed someone in the room had spoken, but the voice wasn’t familiar, and I couldn’t say for sure if it was male or female.

I’ve had long hair for at least the last 20 years, and I’ve never considered going short, so I tried to push the idea out 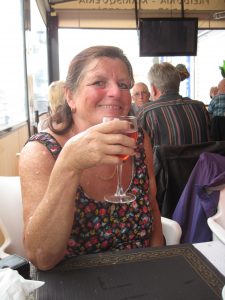 The ‘old’ me, before my transformation

of my mind, but I got the message again during the night, and again a couple of days later. I discussed it with Alison, and a couple of trusted friends, and they said as I’d been given the message three times, I should trust it and act on it. Alison even visualised the style I would end up with, and I am absolutely delighted with it.

The transformation in my hairstyle has also brought a transformation in my attitude. Everyone says I look younger, and I am more feisty, and they are right. I’ve been dealing with an ongoing situation which has sapped my energy and brought me very low at times, but if you look good, you feel good, and I find I have a lot more strength than I thought I had. It’s the reverse of the Samson-Delilah dynamic – cutting my hair has increased my emotional strength, whereas Samson’s makeover robbed him of his physical strength.

It just goes to show that messages from Spirit come in many forms, and if you go with what you’re given, the rewards can be amazing. Love and blessings.

4 Responses to It just popped into my head, honestly!