What a funny foca! 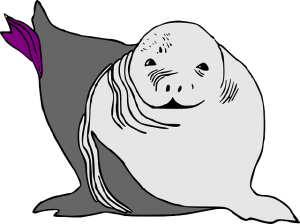 A foca – but hopefully not a lazy one!

I am rather evangelical in my belief that if you move to Spain, or spend any amount of time here, you really need to learn the language. Before we moved here, I started to teach myself and I did okay – I’m a pretty good teacher, and it was one-to-one after all. However, once I could ‘get by,’ other things got in the way. Most people would be happy with that, and my first lesson to myself involved asking for wine, cava, vodka and paella, so I at least had a handle on the essential stuff.  However, I really wanted to banter with the locals at the bar, so I joined a local Spanish class.

The tutor, Alan, is actually an English guy from Hull, but you’d never realise. His knowledge of the Spanish language and culture, and his pronunciation is spot on. He’s  a great teacher, and a seriously funny guy. We seem to spend a lot of time laughing at him or with him, which eases the pain associated with irregular verbs, double negatives and all the other quirks of the Spanish language.

One element of our weekly homework is a translation which is designed to use of the vocabulary and grammar we’ve picked up. It’s quirky to say the least,and it bears little relation to life in Spain – or anywhere else, for that matter. One particular masterpiece dealt with dogs and cows playing chess, before running through the streets with lions and hungry seals. Yes, really! The guy could be a fantasy writer, or a Daily Mail journalist, with an imagination like that.

Before school is out for the day, Alan always runs through the translation to highlight any new or forgotten vocabulary in there. Thus he came to remind us that the Spanish word for seal is ‘la foca.’ Of course, that resulted in sniggers and giggles from a class behaving more like naughty school kids than the expat pensioners most of us are. Going with the prevalent mood, as the best performers always do, Alan delivered the devastating punchline: ‘And if one of the seals is lying on the rocks sunbathing, while the rest of the colony is catching fish for dinner, you could even say he’s a lazy foca!’

Don’t you just love it when Spanish and English meet like that?

6 Responses to What a funny foca!