Free to a good home: dog and husband 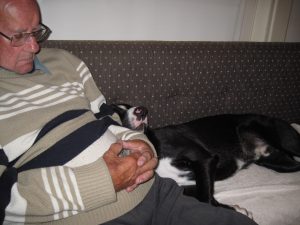 Tony and Paddy – don’t let their calm disposition fool you. These two are trouble!

‘There are two men in my life, to one I am a mother, to the other I’m a wife.’ Those of a certain age might recognise those words from the popular 1970s commercial for Shredded Wheat – you know, the Brillo Pad lookalike cereal that is supposed to be good for you but tastes disgusting. Well, the two men in my life are now going free to a good home – or even a bad one, as long as I never again have to go through the embarrassment they caused me yesterday.

The day started off very well – the last day of our motor home rally wrapped up with lunch at our favourite Chinese restaurant in Punta Prima. After getting home and unpacking the motor home and doing the washing, I had about half an hour before I needed to leave for Algorfa to help with a charity market. I asked Tony if he wanted to come with me, but after watching me unpack the van and do the washing, the poor lamb was exhausted, so I set off on my own.

Everything was going well, and everyone was enjoying themselves and emptying their pockets in a good cause, when a friend said those words no wife or Puppy Mummy wants to hear: ‘Sandra, the Police are taking Paddy and Tony off to the slammer.’ So, off I headed, wondering what the devil was happening. The charity Zumbathon had just kicked off, so I had a nasty suspicion that maybe Tony had got a little bit over excited at the sight of so many scantily clad young ladies bouncing around to music, but that wouldn’t explain why Paddy was also under arrest. He’s not even interested in lady dogs, having been relieved of some of the most important bits of his anatomy almost a year before.

I sprinted across the Plaza de Espana, hoping my friend was mistaken, but no, there were Tony and Paddy, flanked by two of Algorfa’s finest Policia Local. And despite the festive atmosphere in the square, none of them was smiling – not even Paddy, who is the happiest dog I’ve ever known.

I caught up with them just as they arrived at the side door to the Ayuntamiento, and I made myself known to the officers in question. Then I asked Tony what the devil was going on. Apparently, he’d decided to walk Paddy down to the village to surprise me. Well, he did that alright – although shocked or stunned would have probably better described my state of mind than surprised.

Anyway, when Paddy saw all the people in the square, and heard the music, he speeded up. Unfortunately, Tony didn’t. His two speeds are Slow and Stop – there is no position in the Piddock gearbox for Excited Puppy. It could have been worse, of course. Tony didn’t land on the deck, but he did crash into a wall on the end of the lead. When the irresistible force of an 81 year old doing three times his normal speed meets an immovable object like a wall, the effects can be unfortunate. Tony was All Shook Up, and not in an Elvis Presley kind of way. So, he did what he thought was the sensible thing, and sat down on the grass in the square to get his breath back.

The helpful Spanish people who witnessed this thought he’d fallen down, and pulled him straight back to his feet, which made him even more shook up, then a couple of English people shoved a chair under him and asked if he had any pains anywhere. Tony said no, which was probably the wrong thing to say, because the Police naturally assumed that if he wasn’t ill, but he was wobbly on his feet, he must be under the affluence of ilcahol while in charge of a minor – that’s Paddy, the source of all the trouble.

Paddy being a friendly soul – some would say too friendly –  welcomed the policemen in the traditional way by bounding up to them as if he was on elastic. However, when the policemen laid hands on Tony to help him to his feet, Paddy went into protective mode, and that’s when I caught up with them.

So, we went into the Ayuntamiento, and provided our names, address, phone number and car registration. Then I had to explain what had happened in my best Spanish. I did emphasise that Tony wasn’t drunk – not even drunk on the beauty of the Zumba ladies – but it was clear the officers of the law didn’t believe me. They asked if I had been drinking. I could truthfully say I hadn’t, but I knew that as soon as this nightmare was over, I would be hitting the cava or vodka big time. In fact, it would probably be both. Anything to forget all about what was unfolding before me.

I was instructed to fetch the car, at which time the Police would decant my hooligan dog and husband into the car so that I could take them home – and leave them there. Apparently, I was still welcome in the square, but Tony and Paddy definitely weren’t. So, like I said – anybody want a dog and a husband? I’d prefer them to remain together, but I’m happy to separate, as long as they are re-homed as far away from me as possible!