Travels in The Trigano

Since 2002, we’ve been mobile campers, starting with a 22 year old Volkswagen Type 2, and graduating to our fabulous Trigano Tribute 650. Okay, it’s not in the luxury stakes, but it suits us. The articles here will review camp sites in Spain and elsewhere, give a heads up on lovely places to stay, and generally tell everyone about our travels. 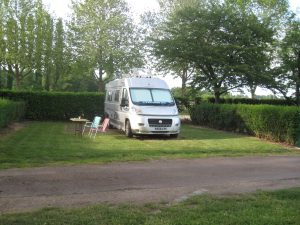 Our generously sized ’emplacement’ on a French campsite near Bordeaux

On our last trip through Spain and France en route to the UK, something struck me that’s never occurred to me before. When we visit the UK in spring or summer, we tend to travel by motor home, driving up through Spain and France, then reversing the process. On the way back to the UK on our last trip, we also camped  in Shropshire, as it was convenient for a family get together, so it was the first time we’ve camped Spanish, French and English in a single trip, and we certainly noticed some differences.

UK camp sites really need to be pretty. They don’t necessarily have to be full facility, but they should be located in beauty spots to attract the campers. The site we used – Riverside in Bridgnorth, Shropshire – was up close and personal with the River Severn, and it was full to bursting point, even in late April, before the camping season had really got going. They were pretty hot on recycling, with bins everywhere to encourage campers to sort and separate their rubbish.

UK camp sites always expect you to pay before you park. We were newly arrived in the UK, and didn’t have much cash other than Euros, and the site didn’t have card facilities. As soon as we’d pitched, we had to head into Bridgnorth in search of a cash point. That’s never an issue in France and Spain. However, if we’re just staying overnight in transit, we tend to pay up front rather than hang around for the office to open next morning, but it’s not expected. 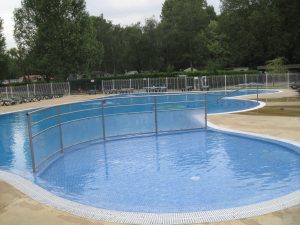 Check out this great swimming pool. At less than €12 per night, this site was a great find

towns and villages. The French are also pretty hot on recycling, and they make a point of asking if you want to order bread or croissants for ‘le petit dejeuner’ next morning. Okay, you’ll pay more than if you headed off to the boulangerie yourself, but it’s succour for the soul to breakfast on fresh croissants or pains au chocolate, without needing to step off site to buy them.

In one fundamental area, though, French camp sites are very different to their UK counterparts – they’re a lot cheaper, even with full facilities. The site we used south of Bordeaux on our return journey cost less than €12 a night, including electric, showers and use of the swimming pool.

The next night was a different story, but by then we were in Spain. The site we stayed on in Puzol, north of Valencia, looked like a gypsy encampment, to put it bluntly. The pitches were large, but all tarmac, with not a blade of grass in sight, and we were packed in like sardines. If it hadn’t been so late – around 8.30pm – we’d have rolled on, but we just had to stump up the requested €30 – yes, just for una noche – and make the best of it.

Thinking back over previous trips, we’ve always paid more on Spanish camp sites, and they’ve usually been rather scruffy, compared to their French and UK counterparts. But at least the site owners were very welcoming, and we got on well with the other campers because we were so closely packed, so we enjoyed our overnight stops. However, there is a big difference between the camping experiences in Spain, France and the UK. Maybe you have your own observations and examples to add?

I’m not being negative here – we’ll do it all again next time we go back to the UK, and enjoy it as always. Vive la difference, as they say in France!

Posted in Travels in The Trigano 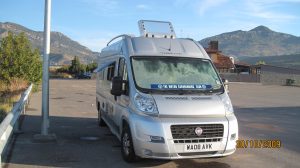 In January 2002, we bought our first motor home. It was a 1982 Volkswagen T2 hi-top, and it was a money pit. However, we were hooked on motorcaravanning, so when Martins of Exeter offered us a good deal on a Toyota Hi-Ace at the Bath and West Motor Home Show in 2003, we snatched their hands off. They actually offered us more in part exchange than we’d paid for our old VW, which helped to claw back some of the cash we’d spent on keeping it on the road.

For five years, we travelled most of England and a fair bit of France in our lovely little home on wheels, but little was the operative word. We needed something bigger and more comfortable, and when we bought our place in Spain, and we knew we’d be making regular trips back to England and hopefully touring Spain too, we decided to trade her in for something bigger and newer, because by then she was 10 years old.

We went back to Martin’s, because they’d done us a great deal on the Toyota, and we’d never had a moment’s trouble with her. She’d sailed through every MOT since we’d had her, and all she needed was the occasional replacement windscreen wiper and a couple of new tyres. I felt guilty parting with her, to be honest, but you have to be practical about these things. and when I spotted the beautiful Trigano Tribute 650 on the forecourt, it was love at first sight. When I saw the full size fridge freezer inside, it was a done deal, and once again Martin’s came up trumps for us.

The day we collected our new motor home – and it was as good as new, because it was only 4 months old, and the previous owner had done just 1500 miles before discovering it wasn’t big enough for them – was bitter/sweet. I cried as they drove our faithful little friend away to be readied for her new owner, but once I got behind the wheel of the Trigano, I just knew we were made for each other. 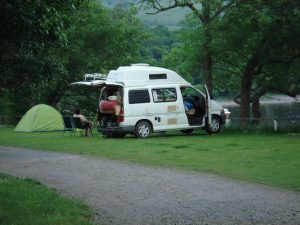 Our faithful Toyota Hi-Ace, parked up on the banks of Loch Lomond in June 2007

Since that August day 6 years ago, I’ve clocked up over 26,000 miles, driving through Spain, France, Germany and England. I say ‘I,’ because I do all the driving these days, but it’s no hardship in my beautiful Trigano. And I’ll be telling you all about the highs and lows of our trips, and maybe offering some tips on travelling through Europe and sharing some good camp sites.

So look out for more on our travels in the Trigano – I have some great tales to tell, and some good photos to share too. However, our plan to travel Spain hasn’t made much progress yet, but it’s going to happen. The problem is, we love it so much here in Algorfa, and there are so many lovely places to visit locally that we feel we should do that justice first. Still, there’s always tomorrow – or next week – or next year. We’ll get around to it some day soon, that’s for sure.