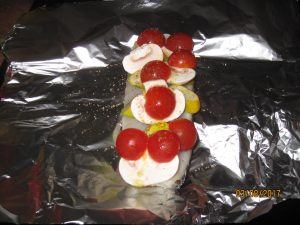 At the moment we’re in England, and I’m missing the Mediterranean – especially the weather. There’s not a lot I can do about that, but I can bring a touch of the Mediterranean to the table. Just before we left Spain, one of our favourite bodegas and frozen food outlets closed down, and they sold all the stock off at half price. Among the €200 of bargain booze and food I snagged were some frozen cod loins, and I brought some of those over with us, as fish tends to be rather expensive over here.

Tony likes his fish as Nature intended, or with batter, but I’m a great fan of Mediterranean-style baked fish with vegetables. Instead of doing it in a dish, I made two foil parcels – one au naturel for Tony with lemon juice, salt and pepper, and another for me.

I seasoned the fish with lemon juice, salt and pepper, then I halved some cherry tomatoes and sliced up a baby courgette an English friend had grown in her garden. Finally I sliced up a couple of button mushrooms and piled the mixture on top of the cod. I added a dash of olive oil for extra flavour, then sealed the parcel and baked it in a hot oven for 20 minutes. While the fish was cooking, I prepared chips from Maris Piper potatoes for Tony, and a jacket potato for myself.

As an aside, that’s one thing we miss in Spain – named variety potatoes. Although the market stall holders insist that all their potatoes are ‘para frier’ – for frying – and Consum even label their spuds as such, we don’t have a lot of success with chips from Spanish potatoes. It’s not uncommon to get three different coloured chips from the same bag of spuds, varying in appearance from soggy and dark  through firm and pale to golden and almost crispy but not quite. So we make the most of the named varieties while we’re here, and take a sack of Wiljas back with us in September 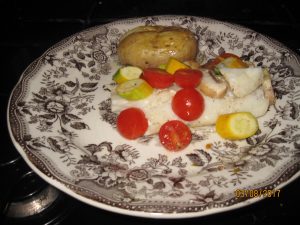 The finished dish – tasty and healthy, and so easy to prepare.

so we – or rather Tony – can enjoy decent chips for a few more weeks.

Anyway, the fish turned out fabulously – firm, white and cooked through, with the vegetables still slightly al dente but also nice and juicy – which is just how I like them. And the best part was, I didn’t have a cazuela to wash out, which is a bonus when you’re in a static caravan sans dishwasher. I just threw the foil away. Foil parcels are a great way to cook all sorts of fish, either alone or with vegetables, although the extra moisture from the vegetables stops the fish drying out if you leave it for too long in the oven or on the barbecue.

If you haven’t cooked fish like this before, why not give it a go? You won’t be disappointed, and it’s much healthier than frying. So easy to cook and serve too – what’s not to love? Buen provecho, amigos!